ESS push back on GPEG ‘Pause And Review’ 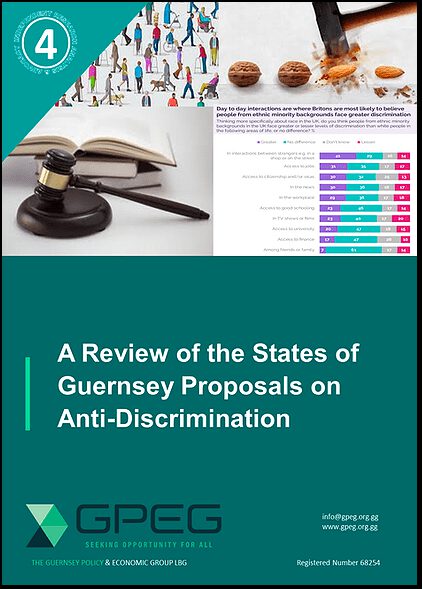 ” I feel compelled to write a response to GPEG’s “Review of the States of Guernsey Proposals on Anti- Discrimination” and The Guernsey Press’ opinion of 14th July 2022 entitled “Think Tank’s valid points worth hearing.” This is because GPEG’s recent review contains a number of factual inaccuracies which makes many of their ‘valid points’ somewhat less valid. In addition, some of the recommendations are based on misunderstandings by GPEG. Many of their recommendations are (and were) already being implemented. The Committee would also very much appreciate further information to substantiate many of GPEG’s points. Without the substantive evidence much of what has been presented appears to me to be a non-evidenced, unsubstantiated opinion piece masquerading as a well-researched report, but one that is full of inaccuracies. This response will start by addressing the inaccuracies and will cover each of the recommendations in turn later.”

“On a further point, GPEG incorrectly quote the definition of disability. The definition initially quoted by GPEG is the definition of ‘impairment’, which is just one word in the definition of disability. In order to qualify for protection from discrimination on the ground of disability, a person must have a “long- term” impairment. This is an impairment which has lasted, or is expected to last, for not less than six months; or is expected to last until the end of the person’s life. It is, frankly, ridiculous to suggest thateveryone will fall within this definition. And even if a person does fall within the definition, it does not mean that they will have cause to bring a discrimination complaint under the new legislation. In any case, the burden of proof initially rests on the complainant who has to show primary facts from which discrimination on the basis of disability could be inferred (i.e. a prima facie case) before the burden of proof switches to the respondent. Unfortunately, these important points are lost on GPEG.”

“Proportionality is at the heart of the Guernsey draft legislation through the concepts of disproportionate burden and objective justification. No employer or service provider will need to provide a reasonable adjustment if it is disproportionate for them to do so. Reasonable adjustments will also need to be both ‘appropriate’ to meet a disabled person’s needs and ‘necessary’. The latter means that disabled people will need to demonstrate a disadvantage because of an impairment in order for a reasonable adjustment to be necessary. Not everyone will qualify, as GPEG claims.”

“The States is planning training sessions for businesses, employers and service providers, that will be free of charge so to factor these costs into the £250,000 figure that GPEG have come up with for the cost of the legislation to the average business is already inaccurate.”

“I would argue that it is bad for the Island’s reputation not to have protection from discrimination and harassment on multiple grounds. The Guernsey Press opinion that I referred to earlier stated “Elsewhere the tone of the report is less measured which dilutes its impact”. This is an understatement! I am concerned about the potential reputational damage to the island of some of the statements in the report. Do GPEG intend their comments such as “minority sexual habits” and “abnormal lust” to refer to some sexual orientations? If so, these comments would appear to demonstrate inbuilt prejudice on behalf of the authors. This is made all the worse and more ironic by GPEG’s strapline, which is “equality of opportunity for all”.”

Without legislation, people know they are unable to pursue claims and so they don’t report discrimination.Merely quoting service user figures from GET/GO/GROW (which are recorded for a different purpose) does not touch the surface.The fact that GPEG claims the scale of the problem is so small and the cost of complying with the legislation is so high, is also highly incongruent or nonsensical. Either the problem is there, large and something needs to be done or there is less of a problem to fix, which won’t cost so much after all. It is surely difficult to make both arguments simultaneously.”

GPEG Recommendations 5, 6 and 7 (These three recommendations are considered together as they all concern the definition of disability).

RESPONSE: GPEG criticises the Committee for recommending the social model of disability as the basis for the definition. Using the social model is the same approach as already adopted in Jersey. The time-limit of six months for a long-term impairment is the same as in Jersey. Jersey’s definition of disability has been interpreted widely by its tribunal.

The full response can be found on the States website here