Summary of the findings from the discrimination legislation consultation 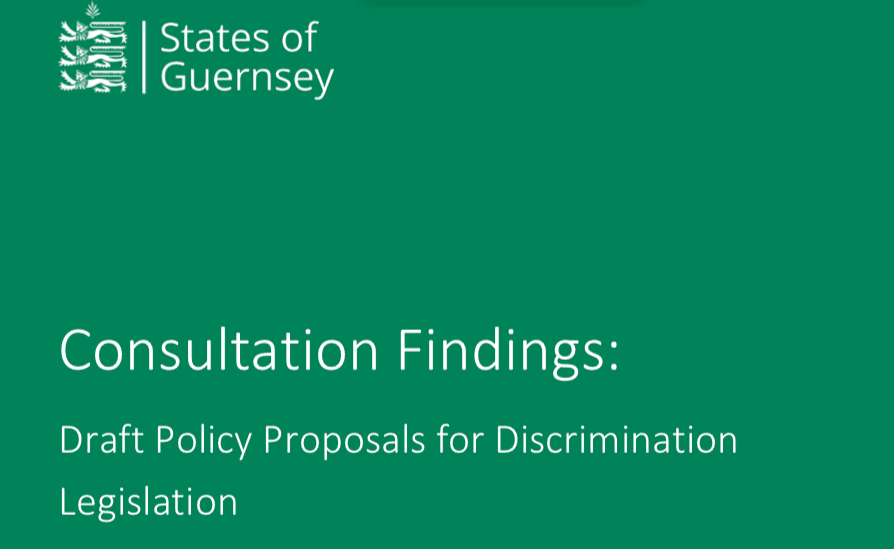 2020 is going to be a very busy and important year for the GDA, especially the first few months as Employment and Social Secuirty (ESS) release their policy letters, by 2nd March, on

Both vitally important to disabled islanders and carers rights and equality of opportunity locally.
As you will no doubt be aware, it has not been an easy 6 months since the release of the draft policy proposals of the discrimination legislation. Today ESS published a summary of their findings from that consultation. It is a difficult read but it is an important document as it sums up the voices for and against the proposals for legislation and an ERO (a heads up that there are many areas of lack of support and misunderstandings on its purpose and the benefit to so many islanders, its a tough read) It is also a long read over 200 pages but I have added the Executive Summary below for your benefit.
Stages of the proposals:

We will hold a members meeting with ESS present, to answer your questions in mid March at Les Cotils, date to be confirmed soon.
If you have any queries please do not hesitate to contact the social policy team on socialpolicy@gda.org.gg

The content of this report
Due to the volume and technicality of some of the responses, this report aims to give an overview of feedback and includes anonymised quotes to illustrate the range and nature of responses received. To be clear, the Committee has reviewed all of the responses it has received, including responses not quoted in this document. The views quoted in this document are the views of respondents and not the views of the Committee.

What next?
The Committee is now giving further consideration to the various policy issues raised in the feedback received, which may result in substantial changes to the policy proposals. Due to the quantity of feedback and in order to manage workload the President of the Committee announced in November 2019 that the proposals would be refocused on fewer grounds of protection with disability and carer status as a priority.

The Committee for Employment & Social Security (‘the Committee’) received over a thousand responses to its consultation on draft proposals for multi-ground discrimination legislation (available at: www.gov.gg/discriminationconsultation) and would like to thank all those who participated for the time and effort invested in responding.

The Committee asked focused questions on a number of aspects of its proposals but also invited respondents with an interest to comment on any aspect of the proposals that they wished to.

Feedback on wider aspects of the proposals
Many respondents did not comment on the general principle of whether we should have discrimination legislation. However, where respondents did comment, opinions were divided. Some strongly advocated for the need for discrimination legislation and an Equality and Rights Organisation (ERO) to be introduced as soon as possible. Others strongly opposed arguing that there was a lack of evidence that discrimination happened in Guernsey. A third position was to argue against the Committee’s proposals in particular rather than the principle in general, with some feeling the proposals went too far and were not similar enough to what was in place in Jersey and the UK. Those holding this position argued that this could increase the cost of compliance for businesses and make Guernsey less competitive as a jurisdiction. The need for an ERO was also questioned, with suggestions that the Employment Relations Service should be expanded as an alternative. As the decision to develop proposals for disability discrimination legislation and an ERO were already agreed by the States of Guernsey in November 2013, the comments from some of those opposing the general principles challenge the foundations on which the Committee based their work.

A range of other issues were raised about the proposals including discussion about the scope of the grounds of protection (particularly around carer status and whether religion should extend to philosophical belief); the need for consideration of retirement and succession planning in relation to age discrimination; queries over the resourcing of the ERO and Tribunal; concerns about mechanisms for handling vexatious complaints; the role of legal aid in discrimination claims; the need for legally qualified chairs in the Employment and Discrimination Tribunal; queries over whether proposed equal pay provisions extended too far; divided opinion on some points such as harassment and accessibility provisions with regard to whether the proposals went too far or not far enough; suggestions that employers should be required to monitor equality; and suggestions to broaden the definition of employment to include more casual workers.

Overview of responses to the Committee’s questions

It is important to note that the questionnaire was not intended to be a representative survey or opinion poll. The consultation was intended to help the Committee to understand what people think and why so that this, along with other considerations, could be taken into account in finalising the Committee’s policy proposals for debate by the States.

Focusing on the specific questions that the Committee asked:

The Committee intends to bring a policy letter to the States before the end of the current political term later this year.
We look forward to seeing you mid march for our next members meeting but would welcome any calls to clarify the current situation or consider how your voice as members may be able to influence anyone voting on this critical topic 22nd-24th April 2020.