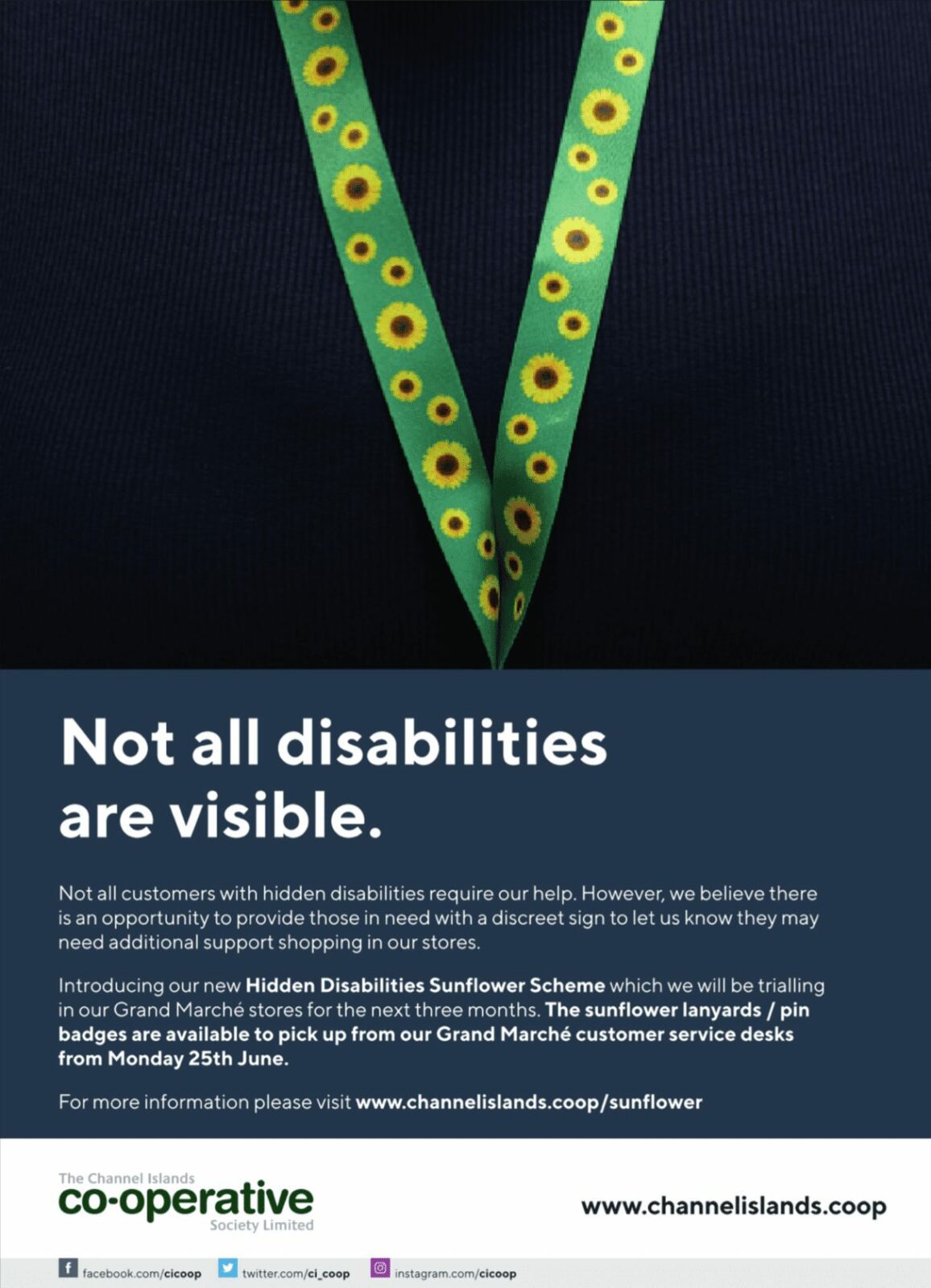 The Hidden Disability lanyard scheme was first launched in Guernsey by the airport in December 2017 and gave travellers the chance to wear the lanyard so trained staff at the airport, security and airlines could offer further assistance as required. You can read more about that launch below.
In June 2018 the Co-Op launched the Hidden Disabilities sunflower lanyard and pin scheme in their Grande Marche stores as a trial. The lanyard or pin give customers the chance to discreetly say I may need some extra assistance whilst shopping. Please see attached the advert in the Guernsey Press.
You can pick up a lanyard at Guernsey Airport, Tourism office, the Co-Op (and pins)

A new initiative is being launched by Guernsey Airport this Friday which will help staff discreetly identify travellers who may require additional support.
The ‘Hidden Disability Lanyard’ scheme recognises that travelling can present particular challenges for people dealing with a range of conditions.  Staff working for the airport or airlines have been trained to look out for specially designed lanyards, so that they can identify where someone may need extra support.
That could include help with reading signs or screens, listening for announcements, requiring extra time to get through security, or ensuring they stay with their travel party.
The scheme came about in response to a suggestion from an airport user, after an accessibility survey was shared on its Facebook page.
Jody Horne suggested the idea of the lanyard scheme that she had experience of using at Gatwick Airport.
Guernsey Airport has worked with local charities such as Guernsey Disability Alliance, Wigwam and Adult Community services to implement the scheme, organising comprehensive training for terminal based staff, ground staff, airlines, security and border agency staff, whilst engaging with airport business partners and airport users to increase awareness of the new lanyards.
As a result of the initiative, Guernsey Airport has been nominated for the Guernsey Disability Alliance’s ‘Think Differently about Disability’ Award.
The lanyards can be obtained free of charge from the Airport Information Desk, local charities and local health professionals from 1st December 2017.  The scheme will also be extended to the harbour in due course.