The Guernsey Disability Alliance acknowledges the compassion and integrity of those who have brought forward the Requête on assisted dying.

Both understandings of the term “assisted dying” and moral positions in relation to legalisation vary across our membership.  The speed at which the local debate has developed has not allowed time for the Alliance to be confident that it could produce an accurately weighted representation of that variety. Our initial evidence, however, suggests that the majority of our members are opposed to the present Requête.

The Executive Board is conscious that where and how the lines are drawn across the continuum of persons seeking assisted dying is a particularly crucial issue for socially vulnerable groups, including persons with long-term disabilities and persons living in poverty (a group in which disabled people are disproportionately represented).  Because persons in the last stages of a terminal illness are by that stage also invariably disabled, this issue is extremely important to us.

In the absence of a clear definition of assisted dying and clear specification of qualifying criteria, we have adopted a position against the requête authorising the legalisation of assisted dying in Guernsey at this time on the basis of what we take to be factually warranted concerns about the preparedness of this jurisdiction for its implementation.  We believe it is of paramount importance that the requête should be defeated.

We do not believe that these concerns could or should shut down the research and debate necessary to justify revisiting this issue in future, but they do set out what we take to be important preconditions to be met before the introduction of any future requête on this morally sensitive topic.

We hope to produce a fully researched response to this matter from the perspective of persons with disability in due course.  The following material is a partial summary of issues we intend to consider.

We welcome feedback from all members of the public to info@disabilityalliance.org.gg 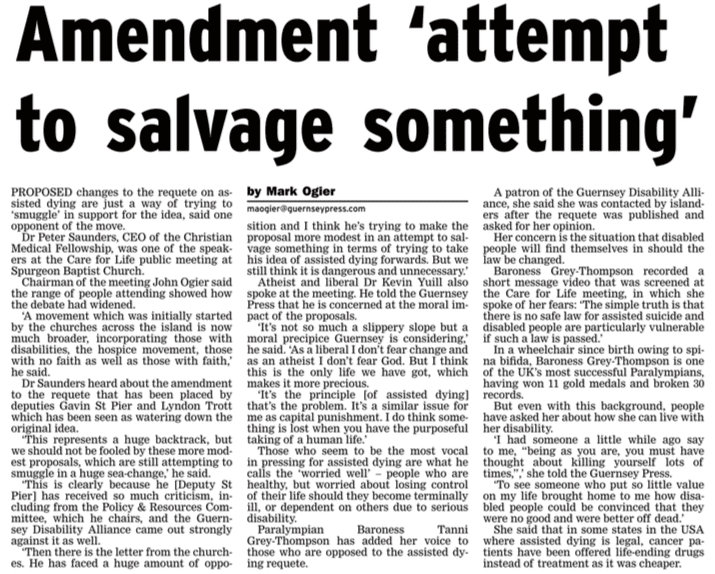