Since Karen GDA coordinated a visit from Access for All, States of Guernsey and Wigwam came over to Alderney and gave Accessible Alderney the boost it needed, lots of small but encouraging moves have been ma 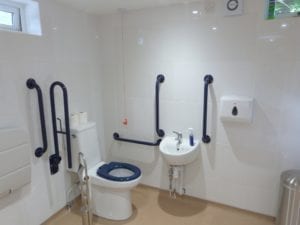 de in the direction of making the island more accessible.. Of course there are lots more steps to take but the awareness of accessibility has risen significantly. The cobbled streets and the ability to access the Dornier are two major areas that need attention but in the meantime some of the significant steps already taken are these.

Aaron Bray, our brilliant Head of Public Works who is already very aware of accessibility issues has been on a long awaited course in Guernsey which will be hugely helpful to us all. 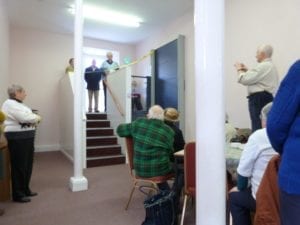 Paul Bunn, our Airport Duty manager is talking with Guernsey about the lanyard scheme, checking out dementia friendly signage, putting in a new ramp and together with AEL has installed lighting in the airport car park.

Rev Elizabeth Bellamy has installed a lift in the Methodist church hall, improved the road entrance and installed an accessible toilet, all of which are now working . The next stage will be a lift into the church and making the building dementia friendly.

There has been a significant rise in the number of people using mobility scooters which is bringing the issue to the attention of the general public. Previously the absence of wheelchairs in the public view lead to the misconception that they didn’t exist, rather than the fact that they couldn’t access the town.

We look forward to building on this promising start.

Pictures shown are of the Methodist Hall.