New Chair and Vice-Chair for GDA 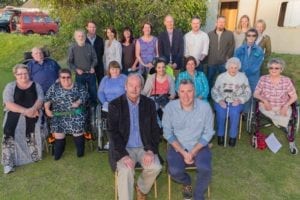 Members of the Guernsey Disability Alliance elected a new Chair and Vice-Chair of their Executive Committee at their Annual General Meeting this evening (Weds 6th July).
Business development professional, Robin Le Prevost, takes over as Chair from Shelaine Green. Shelaine will remain on the committee as Social Policy Adviser.
Arrun Wilkie, who was States’ Champion for Disabled People from 2014-2016, has been elected as Vice-Chair.
The Guernsey Disability Alliance brings together individual disabled islanders, their family members and more than 38 local disability charities to achieve equality of opportunity for disabled islanders and carers. The GDA was instrumental in the creation of the States Disability and Inclusion Strategy and now campaigns for its implementation.
Robin Le Prevost said: “I have a strong belief in fairness and am keen to see Guernsey strengthen its legislation against discrimination. The GDA sparked my interest with their impressive #MakeItReal campaign during the election and I’m determined to use my business skills and experience to help achieve its goals. The organisation already has an excellent Executive Director in Karen Blanchford so my role is to lead and develop the GDA committee to make sure she has all the support she needs.”
Arrun Wilkie said: “Being Disability Champion was one of the most rewarding parts of my time as a States deputy so I am delighted to be able to continue to support islanders with disabilities and their families by joining the GDA committee as Vice-Chair. I’ve been deeply involved with a number of the big social policy projects that the GDA wants to see implemented, including the Disability and Inclusion Strategy, so I can hit the ground running.”
Shelaine Green took over as Chair from the GDA’s founder, Rob Platts, in 2009. The election of new leadership is part of the GDA’s Five Year Plan to ensure its campaigning work continues in the long term.
Shelaine said: “The last seven years have been both hugely rewarding and hugely frustrating in equal measure. Throughout, I have drawn my energy and inspiration from GDA members and the stories of the barriers they face, and overcome, every day. I am proud to have worked with Rob Platts and Dave Purdy and many others to ensure that, while Guernsey may be struggling to work out how to bring down those barriers, it can no longer say it doesn’t know they exist. I look forward to supporting Robin, Arrun, Karen and everyone involved with the GDA as they find new ways to ensure that the voices of disabled islanders and carers are heard.”
Biographies:
Robin Le Prevost runs his own business development consultancy. His early career was in the finance industry but the past 25 years have been spent in business development, including ten years working with the States of Alderney to build their highly successful eGambling industry. He stood for election in the South-East in Election 2016, achieving 889 votes.
Arrun Wilkie was a deputy for the West in the 2012 States of Deliberation and served on both HSSD and the Home Department. In 2014 he succeeded Deputy John Gollop as States’ Champion for Disabled People and was appointed as Co-Chair of the Disability and Inclusion Strategy Steering Group. As States Champion, he placed a number of successful amendments, including challenging plans to cut benefits for disabled adults who live with their parents.
Shelaine Green retired from a corporate life in 2000, having been European Marketing Director for Yahoo!  She was gradually drawn into full-time volunteering, including joining the committee of Headway East London, supporting people with a brain injury. She returned to the island of her birth in 2006 to establish Headway Guernsey and was elected as Chair of the Guernsey Disability Alliance in 2009. In 2015 Shelaine received the Outstanding Individual Achievement Award at the Guernsey Community Foundation’s Community Awards.