Chief Minister is "as frustrated as GDA" by progress 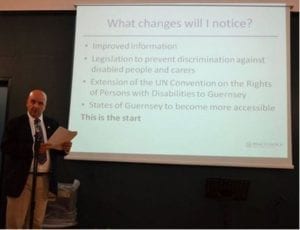 Guernsey’s Chief Minister, Deputy Jonathan Le Tocq, was asked on BBC Guernsey this morning for his view on the Update Report on the Disability and Inclusion Strategy.
Here’s a summary of his main points:

I am as frustrated as Shelaine [GDA] is that we haven’t done more. I think there’s an overall failure for us in the States to be realistic about the types of support we need [to implement policies].
The Strategy is moving forward but not as fast as it should do because we have not prioritised.
I’m very pleased to say that attitudes [towards disabled islanders] are changing. Organisations are already changing their policies and physical structures to give easier access and equality of opportunity.
We need to decide, perhaps, what else shouldn’t be such a high priority. I’ll pick something out of the top of a hat.  Animal welfare legislation is very important to a lot of people but should disability legislation for people here in the island take priority?
We obviously have officers that work on legislation but it’s a very complex matter and that would mean taking them off other work to do this work. It’s not just about putting more money there, it’s about finding the right people to do it.
The States takes decisions in isolation. We tend to get excited about one thing and forget the effects it has. We are going to have to be more corporate and disciplined in saying “this takes priority over the other programmes that we’ve got”.
There is another aspect to it and that is consultation. If you put the legislation in place, it’s not, and shouldn’t be, a sledgehammer. It should come about as a result of education and consultation.
In future States, my hope is that it will work better because you’ll have a central, dedicated team of politicians whose job it will be to remind the States to determine priorities.
I’ve said on more than one occasion that I have no shame whatsoever for focusing on social policy in this States because it had been forgotten before to a large degree and I don’t think that’s an exaggeration.
We have done our best with the current structures. There will be a new structure but also increasing pressures on public finances for the foreseeable future and therefore prioritisation is not an option – it has to be done.