Skip to content
Home » In the News » Transport Matters, Eh? 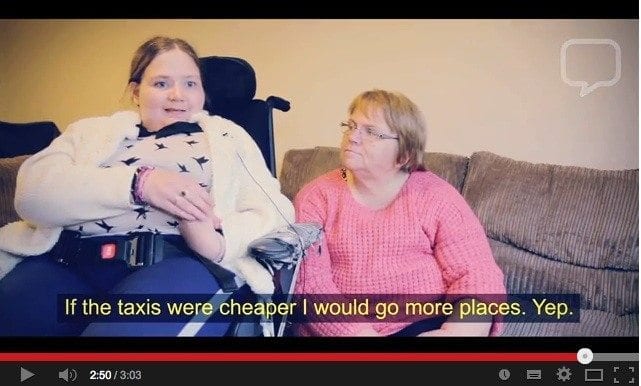 As part of the We All Matter, Eh? campaign, disabled islanders recorded videos of their experiences of public transport in Guernsey. The videos are posted on the We All Matter, Eh? website.
States members debated the Environment Department’s new Transport Strategy at the end of April and both the majority and minority reports included proposals to make it easier for disabled people to get around the island. After several days of debate, the minority strategy was voted through, which includes a budget of £150,000 a year for improving transport options for disabled islanders.
In her video, Sara Jayne Duquemin, 25, who has spina bifida, said “If the footpaths were wider and lower down or if the taxis were cheaper, I would go to more places”. Her mum, Rose, said that getting to hospital appointments was particularly awkward. “There’s only one bus at twenty past that actually goes right into the hospital so sometimes you can be hanging around for forty or fifty minutes”.
Donna Le Gallais, 36, who has a visual impairment and a learning disability, says she doesn’t feel safe getting to the bus stop. “I don’t know which way the cars are coming and different things like that. I used to get taxis for a lot of the jobs I used to do and Dad used to have monthly bills and it used to cost Dad quite a lot of money”.
Wheelchair user, Peter Hill-Smith, 66, said: “Transportation for disabled people isn’t great on the island. I want to try to keep my independence and do my own thing. I know there’s people who will take you out but it takes away your independence because you’re reliant on someone else.”