Sporting opportunities for disabled people on the up 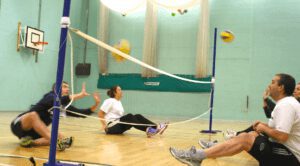 The Guernsey Sports Commission hosted a serious of consultations with representatives of different sports and other organisations to identify ways to provide better access to sports. Some of the initiatives planned for 2014 include running workshops for coaches to upskill their knowledge on how to make their sport more accessible, starting from simple changes to the way sessions are run at grass route level to supporting and nurturing talented athletes. Inspiration and knowledge is hoped to be gained from a serious of guest speakers, including Danny Nobbs, Paralympic shot putter, who will visit the island in January.
Meanwhile Sarah Whitchurch, a local wheelchair athlete, has embarked on her own very inspiring sporting journey. In 2013 she took part in the Guernsey and Jersey Half Marathon, Castle Swim, Skipton Swimarathon and, with the support of donors, has just purchased her own brand new racing wheelchair. Read more
Jo Turville from the Guernsey Volleyball Association has launched Sitting Volleyball, a paralympic sport similar to volleyball with the main difference that players sit rather than stand. Sessions that have already taken place had a good take up and Jo is hoping to promote the sport further in the coming year, especially with children. Sessions are aimed at players of all abilities and help on saturday mornings at St Sampson’s High. Read more