Skip to content
Home » In the News » Hustings draws the crowds 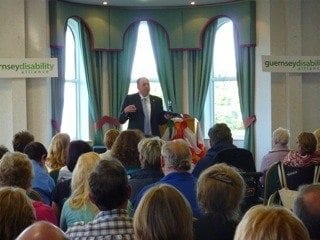 It was a full house for the States Champion hustings in the Harry Bound Room at the Cotils last night with more than 100 people eager to get to know the candidates.
For a really good flavour for the event, watch the coverage on Channel TV.
The evening started with Chris George taking group photos. Chris is part of local agency Coast Media who donated all the design work for the election flyers and ads as part of their commitment to the Guernsey community. Our thanks also to Herald Print for rushing through the printing of the flyers and voting papers and to Brittain Hadley for donating the use of their photocopier for the manifestos.
After the photos, Richard Harding from Island FM took over the hosting of the event and asked Advocate Jessica Rowland from Mourant Ozannes, our timekeeper, to draw names out of the hat to determine the running order.
Deputy Arrun Wilkie was the first to the lecturn for his 25 minute grilling. He spoke for three minutes, then answered five set questions in one minute each, then further questions from the audience.
Next up was Deputy John Gollop, followed by Deputy Lester Queripel. Then all three answered questions together at the end.
Questions flowed on many different topics from many different people. Examples were “What will be your top 3 priorities as Champion?” and “When’s the new mental health law coming in and have you read it?”. A common theme was “If you take this job we need you to stick at it at it – not get frustrated and give up.”
As the GDA is the official facilitator of the election, we can’t mention what the candidates said in response. If you weren’t at the Hustings and you would like to meet them then you would be very welcome to come along to the announcement of the result, at the next GDA monthly meeting on Wednesday June 6th at 7pm at the Ron Short Centre.